Hi, request for your support in troubleshooting a c64 breadbox.
Screen shots attached of blue screen.
I have replaced U14 already, but no change. I have checked U18 6587 and U19 6581 in another computer, and appear ok.
Dead test did not flash or indicated ram issues.
Screen Shots attached.

Your suggestions will be greatly appreciated.

You could check the common problems screens here for something or somethings that are similar. 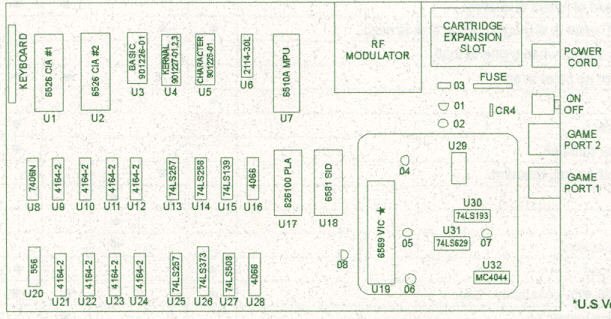 Markeno said:
You could check the common problems screens here for something or somethings that are similar.

Thanks so much! I have. But no one screen fits exactly to the problem.

I'd think ram to start, or U13 or U25 (the other ram multiplexer). It looks like U14 could be a cause as well. There are I am sure others. Ram often can get overvoltage damage, U13 and U25 fail apparently more often if they are the MOS brand chips.

U14 and 25 are cheap, U14 should be as well. Ram is a bit more expensive, and there are 8 chips and you could have anywhere from 1 bad chip to 8 bad chips (especially if it was due to overvoltage). Ram usually fails first in an overvoltage situation. The system is healthy enough that it is doing something as the test cartridge is trying to display and getting something there, but I don't know how much trouble it will be to get sorted. I am not making the suggestions from any great level of experience, just largely from observing the images available there.

I am assuming you got this C64 in this condition and it was not previously working and suddenly stopped? Also did you check the 5V DC on the power supply especially if it is an old vintage supply? 5.2Volts DC is the Maximum recommended from those original supplies, as any more than that and they can fail without warning (well even at 5.2Volts they could), when they fail they typically fail and send through more and more voltage. It is not that 5.3 or even 5.4Volts is too much (well getting really close to unsafe there), it is because the supply can drift or jump in voltage while in use. The ram is only rated to take 5.5Volts I believe. So it usually fails before anything else, but other chips will usually follow shortly after in an overvoltage situation.

Description
A startup screen full of random characters or strange images, similar to one caused by bad RAM. In most cases the C64 still works. Also in many cases the C64 works with a (deadtest) cartridge.
Cause
Bad Logic Chip U13

Description
A startup screen with incorrect characters, you’ll see most of the time that there’s incorrect placement of text. In all cases the Commodore does function correct, but incorrect display of characters.
Cause
Bad Logic Chip U14

Description
Startup screen problems with:
General
Blank screen, no border. Shorted chips may get warmer (sometimes very hot) than the other RAM chips. Partial failure: will sometimes produce “garbage” screen, abnormal number of bytes free (lower than 38911) or “OUT OF MEMORY IN 0” error on startup screen.
Cause
Bad RAM chips or bad socket contacts of the RAM
(M41464) 2 RAM CHIPS (64K X 4 DRAM)

Hi, sorry for the delay as it took me a couple of weeks to get the parts in the mail.

I have replaced U 13,14 and 25. I have checked PLA, CPU ,etc.. It is weird I never get a memory error from the diagnostics cart. But I can only think RAM must be the issue.

Any other suggestions will be greatly appreciated.


I honestly do not want to replace the memory of this machine....so I may just recycle it or sell in parts.

Yeah, RAM would be my first guess. Which does indeed suck.

I have a perfectly good 1984-era breadbin that also has bad RAM... but otherwise works just fine.
A

TomXP411 said:
Yeah, RAM would be my first guess. Which does indeed suck.

I have a perfectly good 1984-era breadbin that also has bad RAM... but otherwise works just fine.
Click to expand...

I replaced u15 and

TomXP411 said:
Yeah, RAM would be my first guess. Which does indeed suck.

I have a perfectly good 1984-era breadbin that also has bad RAM... but otherwise works just fine.
Click to expand...

I replaced U15 And U26 with NO Change. So, I remembered the piggyback method. I tested RAM until found the one bad ic.

I replaced it, now the machine is back to 100% working condition.

Thanks for your help!